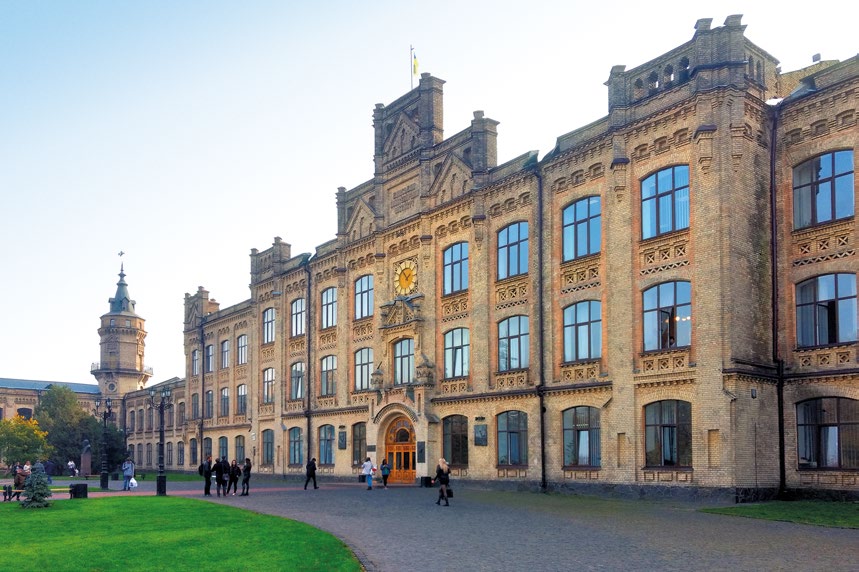 The Kyiv of the late 19th – early 20th century was a unique city. The rapid growth of industry and trade and huge donations from Kyiv millionaires turned the city into a modern and prosperous place worthy of its centuries- old history. Of course, many outstanding buildings were constructed. Among them is the Kyiv Polytechnic Institute, founded on August 31, 1898 as Kyiv Polytechnic Institute of Emperor Alexander II, although its buildings (architect Kitner) were not actually completed until 1902. Between times, the institute was housed in the leased building of the Commercial School on Vorovskogo Street. Construction cost a fortune: 3,150,000 rubles. In addition to the three educational buildings, there was a canteen and four large residential buildings for the director, teachers and other employees. At the time this was the equivalent of $12-m. There were four departments: Mechanical, Chemical, Agricultural, and Civil Engineering. Distinguished scholars worked at the KPI, and many of their discoveries are still in practical use around the world. In 1905-1906, theIgor Sikorsky aeronautical department appeared within the KPI mechanical club, which made Kyiv one of the Empire’s aviation centers. In September 1908, the section was expanded with airplanes, helicopters, and engines as separate departments. KPI professor Nikolay Delone was a passionate proponent of aviation and gliding, and he basically founded the Kyiv aeronautic community. The abilities of students and graduates of Kyiv aeronautics promoted KPI’s worldwide reputation. It is enough to mention just two names. Igor Sikorsky, the inventor of the helicopter, whose name the institute proudly bears today. And Sergey Korolev, the founder of practical cosmonautics and rocket and space technology. In 1998, the Technical Museum opened at the Institute. It contains more than 10,000 displays from the various fields of science and technology – instrument engineering, radio engineering, radio electronics, telecommunications, precision engineering, aviation and astronautics, and much more besides. Additionally there are unique documents, photographs, letters, and the personal belongings of outstanding scientists of the Institute. Next to the museum is the pathway of monuments to and statues of outstanding scholars, such as the pioneer of computer technology Sergey Lebedev, the pioneer of space exploration Sergey Korolev, the founder of Electric Welding Institute Evgeny Paton, and many others.