Khreshchatyk is the main street of Kyiv.

Built postwar on the ruins of the old Khreshchatyk, this house resembles a tall castle with a dungeon and two adjoining towers, standing on a rock above the river. But this river is the stream of people flowing down the street. The width of the street here reaches 130 meters, which makes the housecastle appear even higher and more imposing. It is flanked by waterfalls of granite stairs accompanied by street lights in the form of blooming magnolias. House is now visually cut off from the street by a granite retaining wall. The architects who built the house were inspired by the Spanish Steps in Rome and although this is not a direct copy, you might describe it as a Ukrainian baroque “interpretation”, In this exuberant context, the star surmounting the central tower has never been perceived by Kyivans as a USSR ideological symbol. On the ground floor, a small cinema – “Druzhba” (“Friendship”) – was known throughout the city for showing rare films. 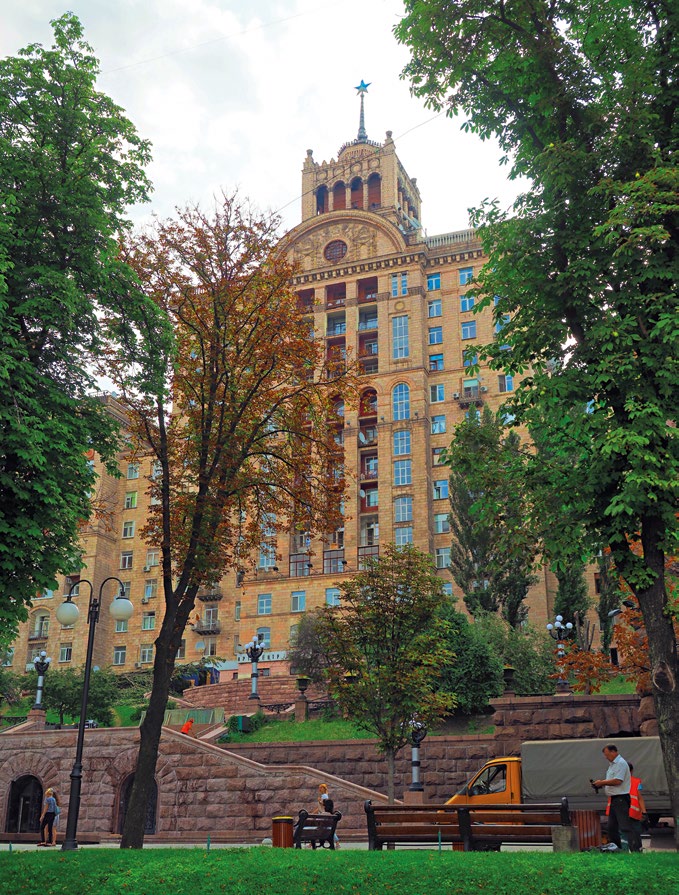 This romantic place has always attracted creative professionals: It is a very rare film shot in Kyiv that does not include at least one scene on the stairs and close-ups of its magnolia streetlights. Today, the House of Friendship is a favourite of Kyiv free climbers. From its roof they enjoy a spectacular view of Khreshchatyk and its surroundings. Once they even attempted to celebrate the New Year on the roof. But this activity is NOT recommended. The residents do not share the enthusiasm of these thrill-seekers and get extremely angry with their antics.