By Kyiv standards, Khreshchatyk is very recent. Less than two centuries ago, a stream ran through this site. Now there is Khreshatyk, the premier main street of the capital, and its business and cultural center. What is more, this street was not simply laid down – a deep ravine was filled up with thousands of tons of soil taken from the surrounding hills and compressed into a solid foundation. And only then were the three separate parts of Kyiv – Pechersk, Podil, and the Old Town (Princely Town) conjoined into the city as we now know it. Under the shadow of lindens and chestnuts, Khreshchatyk is much shorter than it seems, a little less than a kilometer. The street is meant for leisurely strolls, convivial encounters and gatherings, and that is why shops, cafes, and restaurants line its pavements. During WWII, the street was totally reduced to ruins and the story of its restoration is a cause of local pride. Kyiv architects travelled to Europe to study the optimum designs for the main street of the capital. They took inspiration from the optimistic and uplifting architecture of Italy and Spain, and combined these styles with traditional Ukrainian Baroque to produce a striking result.

The chief architect, Anatoly Dobrovolsky, remade Khreshchatyk much wider than it was before the war. 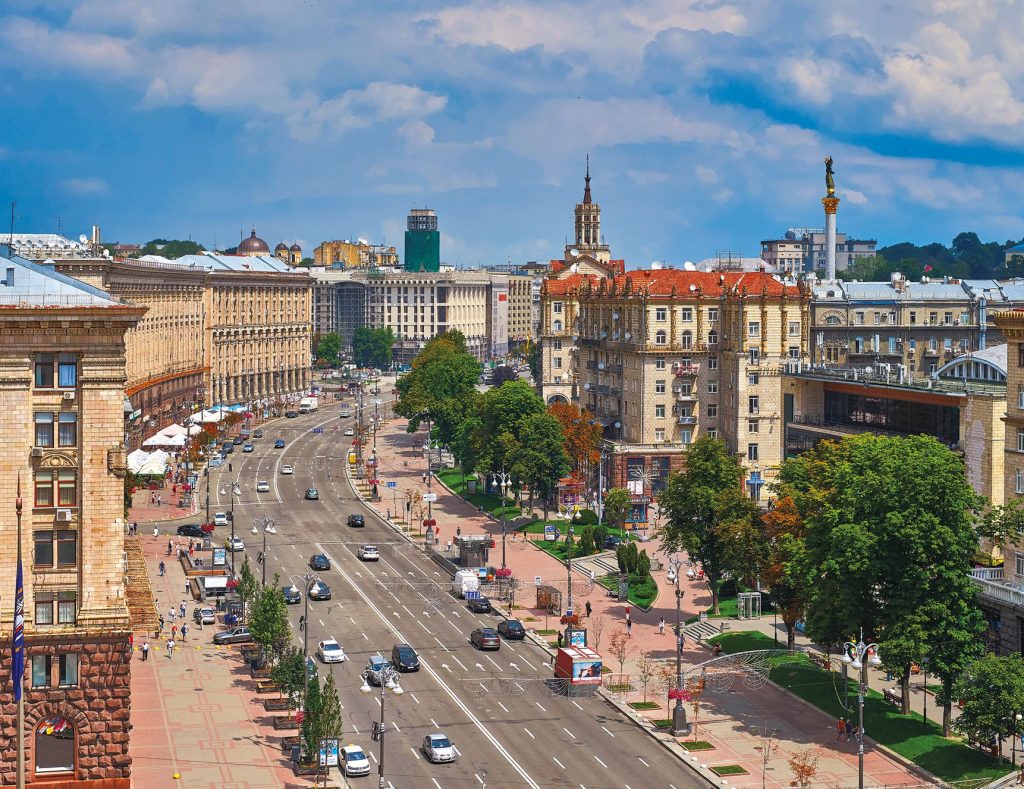 The chief architect, Anatoly Dobrovolsky, remade Khreshchatyk much wider than it was before the war. On average it is 75 m, and near the central department store, (known as TsUM) – 130 m. Here you will find the famous chestnut groves, manicured lawns, and flowerbeds. In the early 1950s, the time of internal USSR struggle “with excesses in architecture,” that all these boulevards, lawns, golden tiles, columns and magnificent Corinthian creations were considered to be an ostentatious disgrace. Dobrovolsky’s high position and career came under attack and he was removed from office, but nevertheless Khreshchatyk had acquired its spectacular makeover that prompted a foreign envoy to say, “I’ve seen a lot of parks in cities, but for the first time I see a city in a park.” The greenery of the gardens, the trees lining the street, the intersecting squares – all combine with the various colors of brick, red and gray granite, and decorative ceramic tiles to give Khreshchatyk an attractive and colorful aspect much admired by Kyiv’s inhabitants and visitors.