The history of Khmelnytsky Monument.

The monument is dedicated to the Hetman of the Zaporizhian Host Bohdan Khmelnytsky. It was built in 1888. It is one of the oldest sculptural monuments in Sophia Square and is a dominating feature. Here on 23 December 1648 residents of Kyiv greeted Khmelnytsky and his Cossack regiments after the victory over the Polish Army at the battle of Pyliavtsi. The monument has suffered some misfortunes. First, there was a location problem. Permission was originally granted for an equestrian statue in Bessarabka only. But eventually the monument was permitted in Sophia Square. But then another problem arose – which was the politically correct direction for the Hetman to be pointing with his mace? On Bessarabka, the hetman would have pointed his mace towards a popular pub. And in Sophia Square? – somewhere in the direction of Moscow or Sweden. The author’s original idea was to “threaten” Poland with the mace, but then pilgrims going to Sophia would have been staring at the horse’s rump. It was finally resolved but then came a confusion over dates. Two main dates were to be commemorated: the reunification of Ukraine with Russia in 1654 and the unveiling of the monument on July 23, 1888. 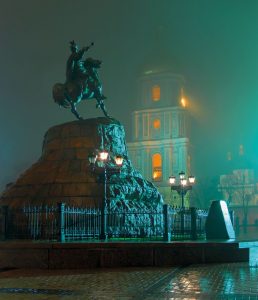 The first plaque installed read “Bohdan Khmelnytsky. 1654-1888”, which surprised and puzzled many as to the hetman’s extraordinary longevity. This was then replaced by the enigmatic and equally confusing “1888”. Third time, they got lucky. The statue was orinally surrounded by shrubs, bushes and a wrought iron fence with lanterns. Then the fence was removed and flower bed was dug around the pedestal. Probably the best the Khmelnytsky monument looked was from from the mid-1950s to the early 1970s, when its pedestal was completely covered with ivy and surrounded with a bed of roses with paths between them. Later the ivy was cut down and the roses were replaced with more mundane plants, until the next reconstruction of Sophia Square, when the fence was restored but no flowers.