The “Black Square” painted by Kazimir Malevich makes most viewers raise their eyebrows in astonishment rather than admiration. But one should not take this picture as a painterly masterpiece; it is more of an artistic gesture, a manifesto, a comment. The “Square” cannot be divorced from the context of the society which provoked it. Kazimir Malevich (1879-1935) was born in Kyiv into a Polish family and was baptized in St. Alexander Roman Catholic Church. He studied painting at the Kyiv School of Art under Nikolai Pymonenko in the Alexander Murashko studio; famous at the turn of the century. Malevich began as a classical painter. However, the new century, with its rapid technological advances and a clear signs of imminent apocalypse, caused a revolution not only in painting, but also in other artistic fields. Creative artists were looking for new and novel means of expression, arguing that the old ways were not suitable for depicting the future. Amongst the avant-garde, new directions and philosophical trends emerged; and Kazimir Malevich founded one of them – suprematism. Later, he moved to Moscow working as an artist-designer in the opera house and illustrator of selected futuristic poems. In 1915, he created the “Black Square”, in which he advocated the supremacy of pure geometric form over representation, desiring to “free art from the dead weight of the real world”, as he put it himself, and to free the paint from its secondary role. The iconic “Square” was followed by his many other suprematist works that had a huge impact on artists worldwide. 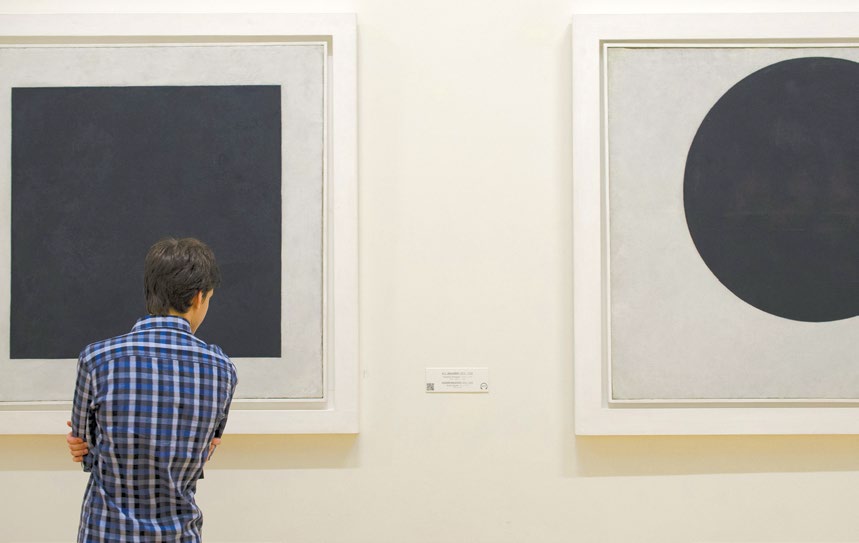 In the 1920s, Kazimir Malevich often came to Kyiv.

Suprematism became one of the main fields of Russian avant-garde and spread widely throughout artistic communities. After the revolution, Malevich became a leader of a group called UNOVIS. This, the “Affirmers of New Art” was enthusiastically welcomed in the first decade of Soviet power but later, like the poet Mayakovsky, was condemned and persecuted after the 1930s. In the 1920s, Malevich often came to Kyiv; where he painted the walls of the hall in the Kyiv Academy of Sciences. Through 1927-1930, already famous worldwide, he taught painting at the Kyiv Art Institute. His last exhibition while he was alive was also held in Kyiv. In May 2008, not far from the place where the artist was born and raised and parallel to the street named after him, a cube-shaped monument (architect Antonyuk) was unveiled. Made of white aluminum frames with the inscription Kazimir Malevich, the cube stands on black tiles, symbolizing his famous picture.

Ukraine, the world’s largest sunflower producer, set a world record in 2016 with a harvest of 13.6 million tons. There are so many sunflower fields in Ukraine that the big round yellow flower has become one of the symbols of the country. The sunflo ...

But it is another culinary legend (Chicken Kyiv) that ranks alongside Kyiv torte and its origins are shrouded in similar rumours. They say, in the late 19th century, at the Kyiv restaurant, this “cutlet of poultry” (côtelette de volaille) was re ...

Persian walnuts, in Ukraine called Greek walnuts, are associated by many people with warm countries, where they actually grow wild, like in China, Iran, India. That is why, coming to Ukraine for the first time, you might be surprised to see them grow ...

Compote is a traditional Slavic drink made from fresh or dried fruits or berries. Uzvar is a kind of compote. It is made only from dried fruits, with honey added, and, unlike the usual compote, its ingredients are not boiled long, rather it’s broug ...

In English, the word horilka means Ukrainian vodka distilled with red chili pepper. But in Ukraine, horilka is not only that drink, but any vodka, including the home-brewed one known as samohon, or moonshine. Usually, wheat or rye is used to produce ...

After the end of World War I, a rush to fortify seized all of Europe, including the Soviet Union. Given the advent of long-range, large-caliber guns, tanks and aircraft, the European states started actively preparing for and defending against war in ...

This unique complex began in 1964, with the construction of a huge dam and enormous reservoir to increase electricity generation for all of the country. This large hydro system comprises the HPP (Hydro Power Production) building, the overflow diversi ...