The interesting history of Cyril Kachanivka.

This extraordinarily beautiful place is known as Tarnovsky Estate. Why it different from other palace parks? It is closely connected with the glorious names of many world celebrities.
The estate was given to Count Rumyantsev-Zadunaisky as a gift by Empress Catherine II. But soon after, the estate passed as an inheritance to the Tarnovsky family and, thanks to them, it survived into its heyday. In the 1820s, a magnificent palace was built in the classicism style, surrounded by a huge park; ponds were dug, two of which – Bolshoy (Big) and Mayorsky (Major’s) – resemble huge lakes; gazebos and pavilions were built; sculptures were erected; grottoes and bridges constructed. But Kachanivka’s fame comes not from the architectural merits of the estate, but from its history. 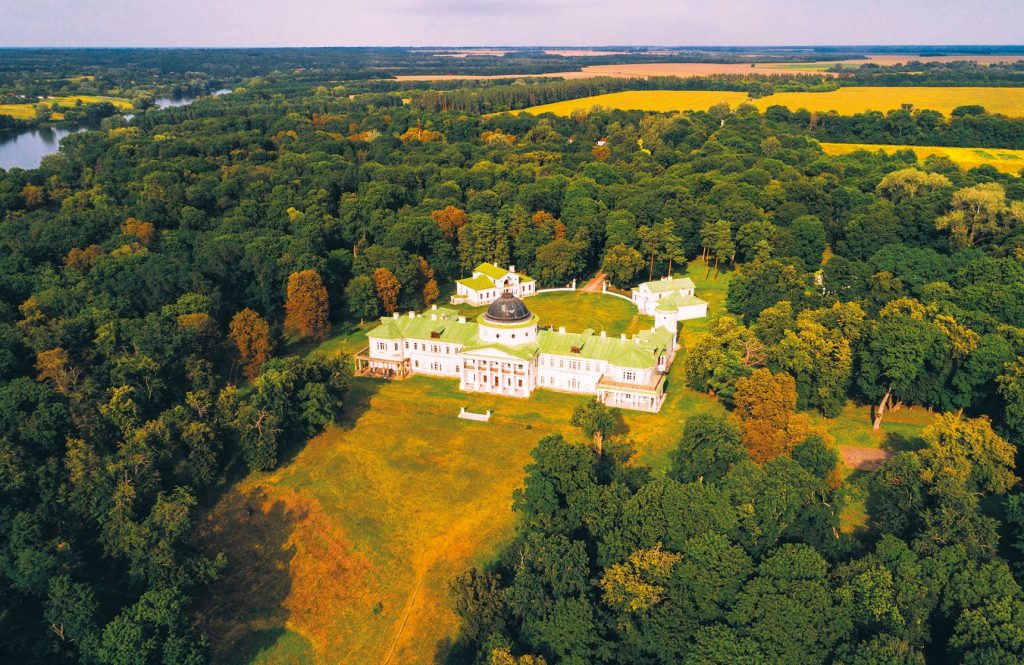 Over the decades, the literary and artistic elite of the era visited several generations of Tarnovskys. The writer Nikolai Gogol and composer Mikhail Glinka, who worked here on his opera “Ruslan and Ludmila,” stayed for a long time; artists Brullov, and later Repin and Makovsky. The future national poet of Ukraine Taras Shevchenko was here many times. Visiting artists painted the views of Kachanivka and left their paintings as a gift to the hospitable hosts. Paintings by Brullov, Shevchenko, Repin, and Serov made up the core of the collection, which also had paintings by Van Dyck, Sternberg, Aivazovsky, Kiprensky, Tener, and others.
In addition to the art gallery, Kachanivka was famous for its collections, including a collection of Ukrainian antiquities. One of the Tarnovskys purchased the hetman Khmelnytsky’s sword, personal belongings of Polubotko and Mazepa, and many other priceless objects. Unfortunately, after the Bolshevik revolution, the estate was nationalized and left to destiny. Precious collections, paintings, and sculptures were partly destroyed, partly stolen. The park and many buildings, including the 76-room palace, fell into disrepair, gazebos and grottoes were ruined, and many centuries-old trees were cut down for firewood by neighboring peasants. The estate was used as a hospital during the war, and as a tuberculosis sanatorium in the 1970s. Only then did its gradual revival begin.
Today, Kachanivka is a national reserve, and restoration work is being done on all 732 hectares (1,800 acres).