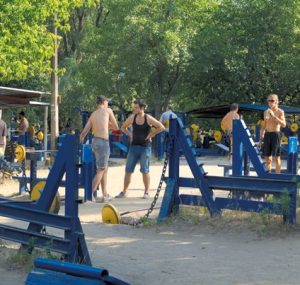 Kachalka is located near the beach and Venetian bridge. You can find it literally by ear – its persistent metallic clanging reverberates through the entire neighborhood. This area of free gym equipment near Hydropark metro station marked its 50th anniversary in 2016. Its key feature and trademark are “home made” fitness machines improvised from various materials. The history of this place began with Professor Yuri Cook, a research scientist (math) at the Cybernetics Institute and a hardcore sports enthusiast. One day, he and his friends built the first simple chinning bar; a crossbar between two poplars under the bridge. Kachalka was gradually developed and in 1972 evolved into athletics field. It is popular with male and female visitors, young people, ordinary office workers, passers-by, and, of course, athletes. Of these, there are old-timers who have been visiting this sport ground for more than 30 years. As for the gym equipment and exercise machines, they are more like props from fantasy/steampunk movies – weird and wonderful structures made from motor tires, tank tracks, ship chains and other bizarre items. 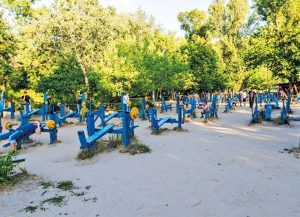 Kachalka is completely free, but many visitors voluntarily make donations for a 24-hour guard, electric power (the facility works in winter, when it gets dark very early), water, metal and the work of welders who maintain and install existing and new equipment Kachalka became internationally known after football’s Euro 2012, when foreign journalists published numerous articles featuring these tough Kyiv exercise machines and eventually a photo book was released. Today, there are more than 200 machines – horizontal bars, swinging and climbing ropes, a table tennis table and even a boxing ring. After Maidan-2014, the facility was given a makeover with bright coloured paints.