The “Jupiter” plant, whose buildings and assembly shops cover about 70,000 sqm (753,473 sq ft), is in the western part of Pripyat. Before the accident, the plant had a dual purpose: in addition to “Jupiter” tape recorders, it produced electronic components for the USSR’s military-industrial complex. According to rumors, electronics for air defense systems or “black boxes” for military aircraft were manufactured here. 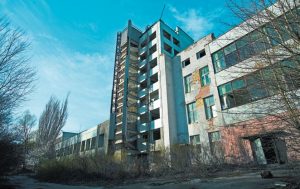 After the accident, in 1987-1988, work resumed in the factory shop. The company “Spetsatom”, working on decontamination of the station, Pripyat, and the zone closest to the Chernobyl NPP, used the plant for production. 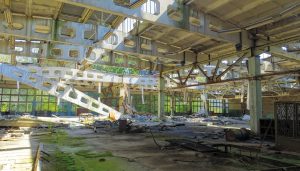 Over time, it began to make robots for work in the sarcophagus, as well as robotic systems and special products for other NPPs in the USSR. By the end of the 1990s, when heat and hot water were no longer supplied to Pripyat, the plant’s ceased to operate. Much of the equipment was transported to the village of Bilhorod near Kyiv. Jupiter’s production workshops, laboratories, and administrative buildings became a bonanza for illegal scrap metal collectors. The factory’s abandoned buildings and workshops are dilapidated. Already parts of the roof in the production buildings have collapsed. It will take just a little more time for the metal scrappers, corrosion, wind, and rain to destroy the building.