The interesting history of ISU-152.

The ISU-152 unit was created in 1943 on the basis of the IS-1 tank that had just been put into service. It was first used in the summer of 1944 during Operation Bagration, and it was then that this heavy self-propelled artillery mount received its nickname “Beast killer.” The vehicles distinguished themselves during street battles in Berlin and the storming of the powerful fortifications at Königsberg – its rounds pierced the thick walls of the enemy’s concrete ramparts. The ISU is famous for its armor protection and high-power artillery system. In Chernobyl, the ISU-152 also had the opportunity to serve its intended purpose: at some point, it was necessary to pierce the reactor wall in order to reduce the dangerously high level of water accumulated while extinguishing the fire, which could have led to the so-called “Chinese Syndrome”*, resulting in a new high-power blast. 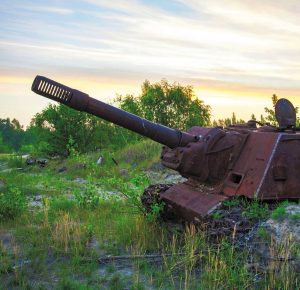 High radiation levels prevented combat engineers from approaching all the necessary points, and so they brought in the “Beast killer.” Even now, rusty and abandoned to fate, this self-propelled vehicle does not seem dead, but rather seems ready to fight again. However, illegal scrap collectors and looters, in contrast to the “Tigers” and “Panthers”, don’t engage in open battle.

* And although it was not necessary to shoot from the ISU (this task was carried out by three heroes who descended into a tank of water in diving suits), according to a popular legend, it was brought here just for that purpose.