The interesting history of Ilya Muromets.

The most powerful and famous of the epic warriors of Kyivan Rus’, Ilya Muromets (aka Ilya Morovlyanin) is a real historical person. His biography is recounted in numerous legends: until he was 33 years old, he could not walk and “lay on the stove” until miraculously healed by traveling magi. After that, he rose to his feet and felt a surge of gigantic forces. Having entered the service of Kyiv Prince Vladimir the Fair (or Red) Sun, Muromets became an elite member of the prince’s army, stood guard over the borders of the principality, battled with steppe tribes, and protected the roads from robbers. Popular rumor ascribes to him many great feats, both completely real and ficticious – a victory over Nightingale the Robber, the Serpent, and the foreign knights. 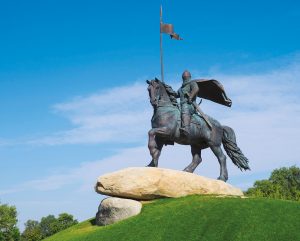 The first written records of him are found in various sources from the 15th century. One of the most interesting is the diary of Erich Lassota, an Austrian diplomat and traveler, who described in detail his journey to the Zaporozhian Sich and his stay in Kyiv at the end of the 16th century. According to him, the relics of the giant Ilya Morovlyanin were buried in St. Sophia Cathedral. It is believed that they were transferred to the Near Caves of the Kyiv-Pechersk Lavra, where they are still buried, known as the relics of St. Ilya Pechersky. In 1988, an authoritative examination of these remains was carried out. It revealed that they belonged to a man of powerful build (about 177 cm / 5 ft 8 in tall, at a time when a man’s average height was about 160 cm / 5 ft 2 in), with well-developed muscles, who also had paralysis of his lower limbs in youth. There are traces of numerous wounds on the body. The most serious of them is a blow with a sharp object (sword or spear) to the chest, piercing through the left arm that covered it. This injury could be the cause of death. Researchers also suggest that, after such a grievous injury, the knight could have left military service and lived out his days in the monastery.
It is noteworthy that Ilya Muromets is mentioned in many Germanic songs and legends under the name of Ilias from Russia. His became a household name, like Hercules, and often serves as a name for outstanding objects, like ships, airplanes, etc.