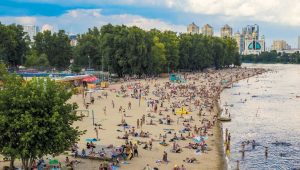 Hydropark was named on the 50th anniversary of the October revolution. But a century ago Kyiv residents would have found no fun here! In this place was a settlement of workers (Slobodka) for maintaining the Chain Bridge – appropriate workshops, crude dwelling houses and rough kitchen gardens. The workers were registered to the Arsenal factory. During the spring, the Dnieper would flood, leaving estates, gardens and meadows underwater and houses and gardens flooded. The residents had a tough time. Hydropark island itself was formed due to severe floods in the late 19th century. So this risky unpredictable area was largely ignored by the nearby townsfolk. There were safer places to be. Bridgehead slobodka, alas, was burned and destroyed during the Nazis retreat in 1943. For a long time only small fishing huts and flimsy, illegal dachas standing on timbers could be found here. Kyivans nicknamed this area “Venice” for its numerous bays and channels. In the early 1960s it was transformed and a large area (188 ha) was remade with beaches, playgrounds, and even two restaurants – Okhotnik (Hunter) and Kolyba (Fishing Hut). A substantial pedestrian bridge (114 m) provided a link with the neighboring Dolobetsky Island. This was called the Venetian Bridge. In short, everything was done in the best way within the limits of what was possible in the Soviet era.

Today, the total area of Hydropark is now 365 ha. There are countless beaches, playgrounds for kid’s rides, cafes and restaurants. There is also an open-air museum “Kyiv in miniature”, which displays the most significant buildings and sites of Kyiv in scale 1:33. From here you can get some amazing views of old Kyiv spread out on the hills above the right bank of the river. Convenient transport to and from with the city (car and metro) has turned Hydropark into the most popular relaxation area for Kyiv residents and visitors.