The interesting history of Chestnut Trees in Kyiv.

Kyiv has been associated with the horse chestnut tree for more than 150 years. In 1842, construction of the Boulevard Shaussee (now, Taras Shevchenko Boulevard) began. Horse chestnut trees were planted along the boulevard but did not flourish. At the command of Emperor Nikolay I they were replaced with poplars. However, Kyivans did not abandon the rooted out saplings – they spirited them away and planted them on their farms. And to everyone’s delight, they recovered and thrived. Next spring they were in full bloom. Since then city authorities have always welcomed a horse chestnut planting and never refuse permission for a new specimen not only in gardens but also on the surrounding streets. 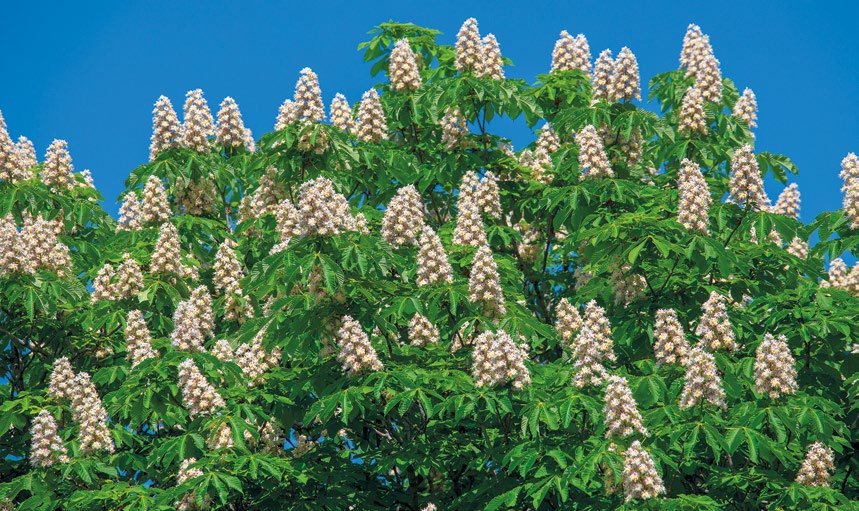 Horse chestnut trees grew, blossomed and fruited in Kyiv in ancient times. In the old days they grew mainly in the Kyiv monasteries, specifically, in Kyiv Pechersk Lavra, Vydubychskyi and Florovskyi monasteries and hermitages. Starting from the second half of the 19th century, the chestnut tree has been established in many orchards and public gardens. Kyivans always loved the chestnut tree for its cool shade and beautiful “candlesticks” of flowers in spring. Many generations have grown up under the Kyiv horse chestnut trees. “And your thick and mighty horse chestnut trees – Chandeliers of Spring – Still blossom as before, Guarding my childhood night dreams…”, Alexander Vertinsky, a resident of Kyiv, wrote in 1956. No wonder that when restoring Khreshchatyk after the devastating Nazi occupation of 1941-1943, Kyivans laid out a magnificent avenue of these wonderful trees on the main street of their beloved city. The Kyiv horse-chestnut flower is the emblem of the capital city of Soviet Ukraine. Today, the horse-chestnut flower is a customary “cream” decoration on the famous “Kyiv torte”, yet another symbol of the ancient capital city. In 2009, in Mariinskyi Park, a monument to an open chestnut fruit was installed; and recently a mini-monument to Kyiv chestnuts appeared downtown within the interesting local history project “Shukai” (Search). You are supposed to find a tiny sculpture but we will help you – it is on the wall, right at the entrance to the city administration building.