Hopak is a Ukrainian folk dance.

In Spain, there’s flamenco; in Poland, there’s the polonaise; in Ukraine, there is, of course, hopak.
Quickly achieving the status of National Dance of Ukraine, without which no parties or festivities were possible before, and today no official concerts, the hopak appeared in the Zaporizhzhya Sich in the 15th-16th centuries. It is an improvisational dance, requiring uncommon dexterity, physical strength, and control of your body. It’s no wonder that only men performed it in the Sich. The hopak was a kind of duel without martyrs, a dance combat in which the Cossacks showed each other what they were capable of. The dance is characterized by complex moves and stunning jumps, which provide fodder for subsequent tales about the hopak battle. The Cossacks, gathered in a circle, encouraged the dancer or dancers with enthusiastic shouts of “hop!” and “hai!” Hence the very name “hopak.” In the 18th century, when the Cossacks were wiped out, the dance did not lose its value, but the rules changed. Women also began to do it, but their part is mostly sentimental and only emphasizes the men’s performance. 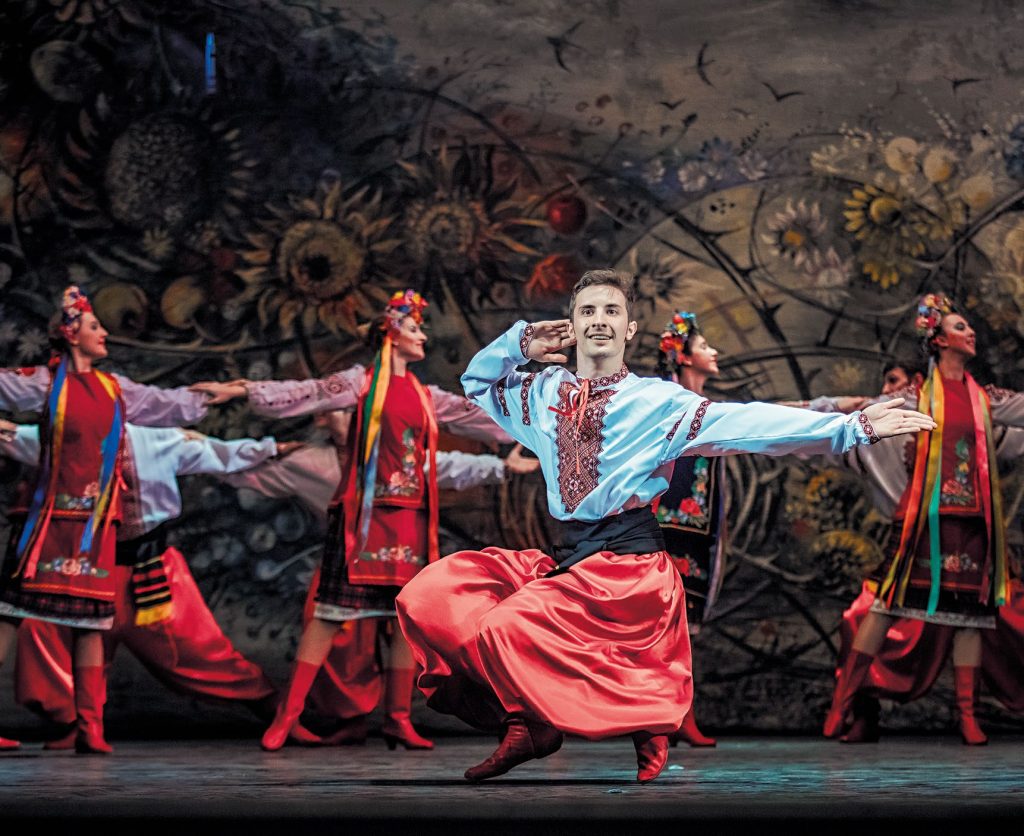 Hopak is such an impressive dance that well-known composers like Tchaikovsky, Rimsky-Korsakov, Mussorgsky, and many others regularly used it as a separate number in operas and ballets. The modern Ukrainian classic hopak is the result of the work of the outstanding choreographer Pavlo Virsky, who, in 1937, created the world-famous ensemble which is now called the “Ukrainian Dance Ensemble named after P. Virsky.” Any performance by this group invariably ends with the classic hopak.
There are special stage costumes for the dance. Men wear scarlet trousers with a wide belt, embroidered shirts, and boots with pointed toes; in other words, traditional Cossack attire. The women wear a festive folk outfit: red shoes, a headdress with ribbons, embroidered blouse, and “plakhta,” about 4 meters (13 ft) of unstitched fabric wrapped around the waist, like a skirt. Lavish plakhta are made of silk and embroidered with gold and silver threads.
In 2017, the Verkhovna Rada (Parliament of Ukraine) added the hopak to the list of national sports.