Holosiivskyi park (NNP) covers roughly 11,000 ha of Kyiv city land. It was opened in February of 2007, but the land was reserved much earlier in February 1994. The park is divided into several zones, the largest one being that in the Holosiivskyi district of Kyiv. The northern part (Holosiivskyi Forest and Maksim Rylsky Park) is bounded by Holosiivskyi Prospekt, Stolichne Highway and Zabolotnogo Street. The southern part (Lesniki tract and Koncha-Zaspa) – by Stolychnyi and Dnipropetrovsk Highways and the administrative boundary of Kyiv. Belychanskyi forest occupies the western part of Svyatoshynskyi and Podilskyi districts. The Holosiivskyi Forest and Maxim Rylsky Park gardens are the most popular. They are greenest and shadiest spots in the city; Orekhovatskyi, Didorovskyi and Kytaevskyi brooks glide through the valleys, with the cascade of ponds (Orekhovatskyi, Didorovskyi, Kytaevskyi) all around. 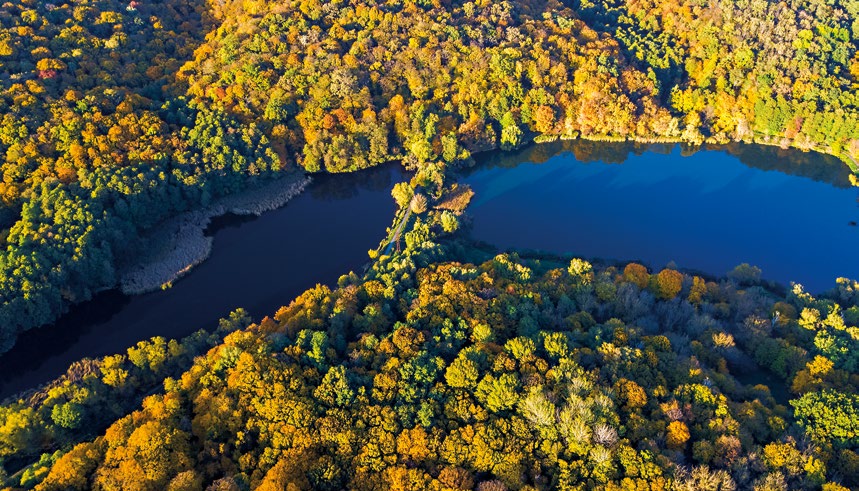 The Holosiivskyi park is beautiful at any time of year.

The broadleaved forests are home to many rare and endangered animals: ermine, otter, badger, and midyanka (smooth snake) among them. Locals say that sometimes you may have rare sightings of foxes, hares and even wild boars. However, walking along the aisles and paths of the well-maintained M. Rylsky Park, you will mainly meet curious red squirrels, which fearlessly demand treats from visitors. You can also feed tit-warblers or ducks in the lakes, watch the marvelous seagulls hovering in the sky and listen to the chanting of birds hidden deep in the foliage. The park is beautiful at any time of year: you can take a walk here, or ride a bike, or even a boat on the lakes. By the way, one of its entrances is easily accessible from Holosiivska metro station. But to get to the central entrance, with the monument to the famous poet, publicist and translator Maxim Rylsky, you will have to travel up the Holosiivskyi Prospekt. The park is free to enter.