Hills and Steps in Kyiv

Kyiv was built on seven main hills called “the mounts” by locals. Three were named after the legendary founders of the city, Kyi, Schek and Khoryv. You will also find StaroKyivska Hill with the “castle” of Kyiv princes, Schekavitsa and Khorevitsa, on top. There are thirteen Lysye Hory (Bald Hills), including that of the “witches Sabbath” Vetryanye (Wind) Hill. Others include Andreevskaya, Bagrinova, Baikova, Batyeva, Vladimirskaya, Yurkovitsa, and Vozdykhalnitsa. Each are separated by steep banks and deep ravines. On the one hand, it helped Kyiv’s ancestors to defend the city. On the other, the dramatic changes in height meant that, until the first half of the 18th century, Kyiv remained divided into three almost completely separated districts: Podil, Pechersk and Old Town. Only by the 1830s, as a result of extensive relandscaping, were the hills levelled and the ravines filled in and turned into streets. However, many hills are still very steep and some of them have long flights of steps – Shelkovichnaya, Franko, Honchara and the by-street Kosohirny for instance. These stairways are an integral part of Kyiv’s architecture. 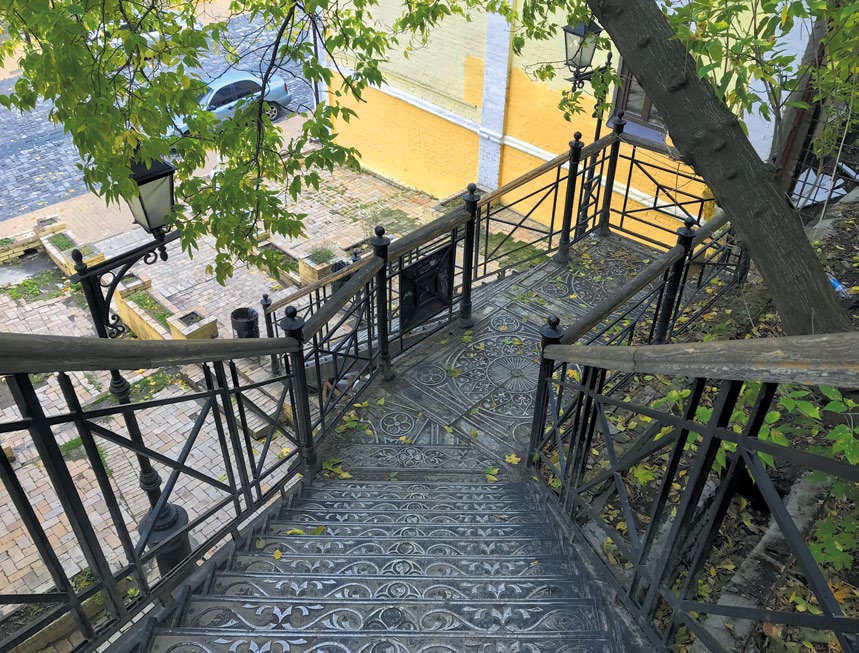 The Hills and Steps are an integral part of Kyiv’s architecture.

The cast-iron staircase leading to St. Andrew’s Church and Castle Hill are renowned for their beauty; as well as the bricked Swiss alley-stairs, cascading down Vladimir Hill. The long stairs to the monument of Magdeburg Law and those from Peoples’ Friendship Arch to Pedestrian Bridge are popular with romantic couples who can meander along for miles and miles. The Dnieper slopes near the Park of Eternal Glory and Peter’s Parkways are equipped with flights of steps at regular intervals. Granite steps behind the retaining wall run up from Khreshchatyk to the House of Friendship. Small stairways – from the old wooden type to the modern, decorated with mosaics and various graffiti – hide behind the facades of houses, connect the streets, and cut across roads creating shorter distances. Sometimes, they just lead to nowhere, their original purpose having now been lost. The narrow steep streets and mysterious stairways are interesting to visitors who wish to take in Kyiv’s full atmosphere. But it is as well to remember that in bad weather, when it is muddy and, especially when it is icy, many of these streets become almost impassable for people. Let alone for cars. As for roller skaters, skateboarders and cyclists, they should be exceptionally careful in all weathers.