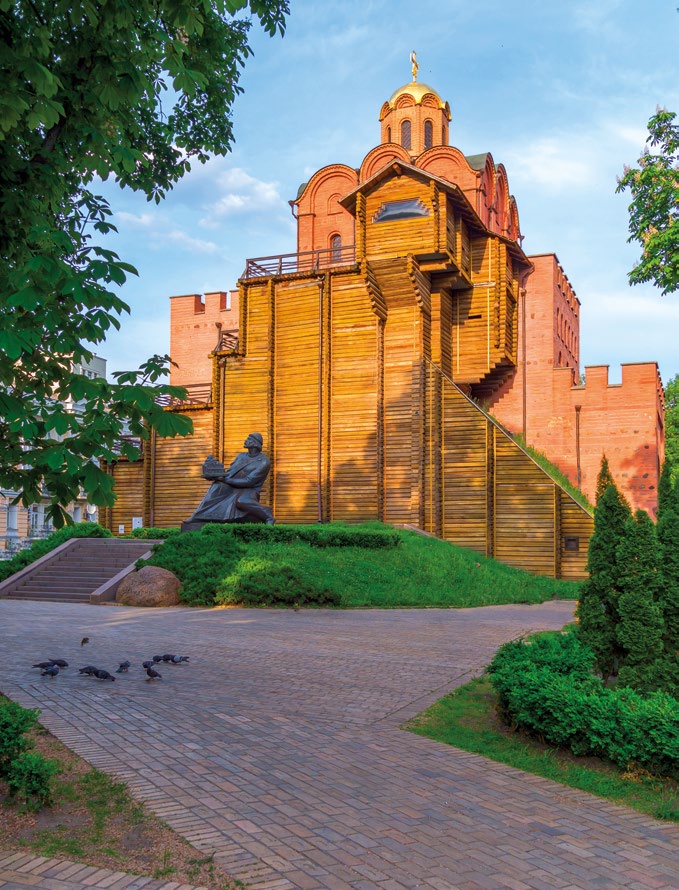 The Golden Gates of Kiev is a fortification that was part of the ancient city walls.

The Golden Gates was the main entrance to Kyiv through the ancient city walls. It was built in the 11th century by Yaroslav the Wise, Grand Prince of Kyiv, in Byzantium style. The entrance through the huge stone and brick structure was by way of heavy oak doors leading through to a secure passageway. This was crowned by a viewing platform and the small Church of the Annunciation, which in turn, was topped by a gilded dome – another possible reason for the name. This golden dome, decorated with mosaics and frescoes, became a prominent landmark easily visible from outside the city. Kyivans called them “Gates to Heaven”, because the rising and setting sun “passed” through them twice a day. The gate was damaged during the Mongol onslaught of the 13th century, but continued to be used (often for ceremonies) through the 18th century, although it gradually fell into ruins, then buried underground and finally this landmark was lost to the cityscape for nearly 50 years. In 1832, excavations were carried out and the crumbling ruins of the once-magnificent entrance were discovered. The walls and sections of the arch that remained were reinforced with buttresses and protected with iron plates. In late 19th century, the Goldengate public garden was laid around this antique monument. In 1979, a pavilion was built over the ruins to protect them and recreate the original look of the gate. The pavilion was completely restored in 1982 to mark the 1500th anniversary of the city – but not everyone liked the result. Arguments about this controversial restoration have not yet ceased. A bronze statue of Yaroslav the Wise with a model of St. Sophia Cathedral in his hand (sculpture Ivan Kavaleridze) was later added to the park that surrounds the gate.