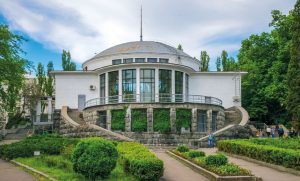 This wonderful slice of nature expands outwards from close to the old red building of Taras Shevchenko National University. For over 170 years this green expanse has been delighting Kyiv residents and visitors. The idea of laying out a botanical garden in this place belongs to the architect of the university building – Vikenty Beretti. He suggested using the waste area in front of the university, with its natural hills and ravines, for a research nursery where student biologists could be trained. In 1839, the first collection of plants appeared brought from all the lands of the Russian Empire and Europe. 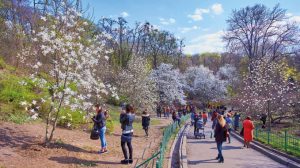 The garden bears the name of Professor Alexander Fomin, who was head of the University from 1914 to 1935. In the cold, famine year of 1919, he with his colleagues heroically saved the collection from destruction. Some valuable flora specimens were brought from Germany during the Nazi occupation of Kyiv in 1941-1943. In the postwar period, the infrastructure of the garden was significantly improved. The old greenhouses were renovated and new ones were built. In 1960, Fomin Botanical Garden was decreed by the USSR Council of Ministers to be a monument of landscaping art of national importance. In 1969, it was granted the upgraded status of a research institution. Today, there are more 10,000 flora species from different geographical areas in the garden’s 22-hectares. The University garden, alongside its scientific pursuits, opens its gates to fans of all outdoor activities. The “old” botanical garden is a green and verdant gem in the heart of Ukraine’s capital.