One of the main monuments in Chernobyl is dedicated to the liquidators of the Chernobyl accident, not only firefighters, but also people of other expertise who participated in the aftermath of the nuclear reactor’s destruction. The inscription on the monument reads “To those who saved the world.” 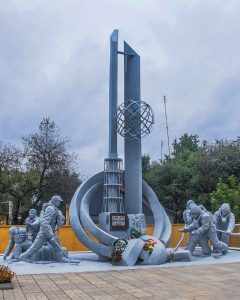 The Firemen Memorial is unique in that it was not created by professional sculptors, but by ordinary firefighters, who still work in the city’s fire department near which it stands. The group created the monument right on the parade ground. The figures of the firefighters and the liquidators were first made from wire cages, then were covered with concrete, giving a rough outline to the sculptures. Smaller details were chiseled, based on their posing comrades. Fire valves and hoses found in the fire station were used. They were installed in the composition and covered with concrete. The monument was created for the 10th anniversary of the Chernobyl accident. It’s about 8 meters (26 ft) high, and depicts one of the symbols of the Chernobyl NPP, the sarcophagus’ ventilation pipe, and a globe. On both sides of the saved Earth are the figures of liquidators, the people who saved humanity from the greatest man-made disaster. The monument is located on Kirov street. Today, it is very recognizable, and mini-copies are awarded as prizes at competitions in applied fire sports.