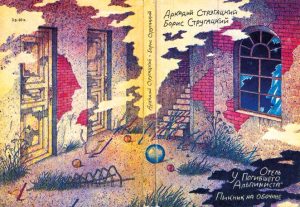 The film Stalker  by Soviet director Andrei Tarkovsky (1932–1986), based on the story “Roadside Picnic” by the Strugatsky brothers, was immediately a cult favorite, but, although not officially banned, it was not shown in the central cinemas, despite its prestigious awards from international film festivals.
It was shot over 3 years, with huge challenges. Two years of work was completely destroyed when the film was improperly developed. The film was re-shot, and the entire script was rewritten the same way. Tarkovsky was an uncompromising and tough director. The Strugatsky brothers managed to convince him only once: not to leave a scene in the film, the repeated crossing of a dead armored vehicle convoy across a dilapidated bridge. This convoy is in the game S.T.A.L.K.E.R. (#97) – standing, stuck on the bridge, the dead “Urals”, ZILs, and armored personnel carriers. 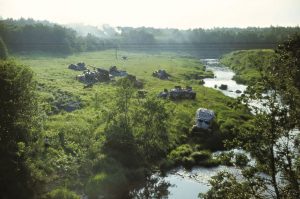 Many consider this film to be prophetic, because in many respects it anticipated the future: the deadly Forbidden Zone and stalkers, penetrating into it at their own peril and risk. The film had a significant impact not only on Soviet filmmaking, but also on world cinema; it is in the top 250 films on IMDb, ranking 206th (as of January 11, 2019).