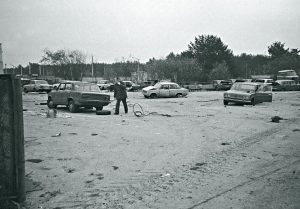 Near the city there is the so-called “Field of Miracles.” Here they buried Pripyat residents’ contaminated cars. Pripyat garages, and the vehicles stored in them, were subject to contamination, but some were “lucky” – a few people managed to get their vehicles out. The cars were washed at sanitary processing points (PUsO) with special solutions in order to bring the radiation level to a more-or-less acceptable level. It did not always work, but many paid a bribe at the PUsO and took their “hot wheels” out, later undermining their own or other people’s health. Before the disaster in Pripyat, more than 2,000 private cars and about 1,300 motorcycles were registered. Some of them managed to be taken out by local residents, the wreckage of others can still be found in the thick of the Zone’s forests, where “metalworkers” (looters) have not yet reached. 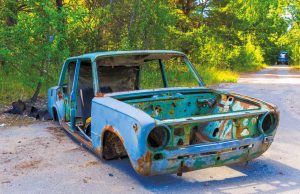 The remaining Pripyat vehicles were buried in the Zone, but not deep. Rain and looters revealed the wrecks of contaminated cars. Hence the name “Field of Miracles”, where cars grow out of the ground…