The park Feofaniya. Between Holosiyivo, Pyrohiv and Teremki lies another historic place in Kyiv – the Feofania skete (desert), where the wilderness bestowed by the holy Creator blends harmoniously with the work of humans. Historian Nikolay Sementovsky, who visited this holy place back in 1864, enthusiastically wrote: “Feofania skete has made a most pleasing and holy impression on my soul, unknown to it before, though I have traveled across almost the entire European part of Russia, and other parts of Europe, and visited all the places famous for their beauty. I wish the Kyivans, who are fond of the sketes, to visit Feofaniya as well. I’m pretty sure that this will impress upon their souls in exactly the same way as it has on mine”. In 1471, this land was first mentioned as Lazarevschina (named after the monk who kept bee-hives in this area). In 1803, when suffragan bishop Feofan Shiyanov settled here, the area acquired its present name. St. Panteleimon church, the main building of the monastery within St. Michael’s Golden-Domed Cathedral, was consecrated in 1912. 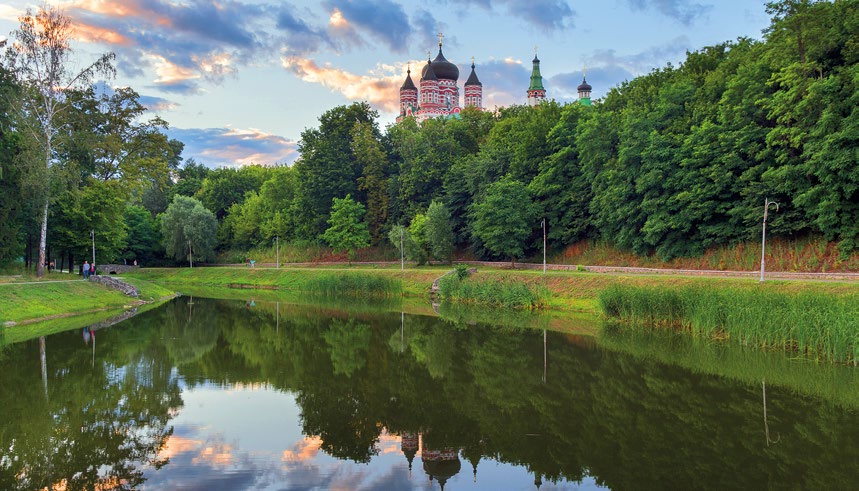 The Feofaniya began to revive in 1990.

It towered majestically above the other churches amidst ancient trees, lakes and meadows. But then times changed. In 1920, Soviet authorities organized a state-owned farm here and a decade later drove the monks out to convert the old church buildings into state hospitals and clinics. Also an observatory and a field laboratory of the USSR’s Institute of Botany. The new occupants gradually removed the church domes, destroyed their interiors, and let the park area become ruined. After World War II, the Institute of Mechanics of the USSR’s Academy of Sciences carried out explosive experiments with in the dilapidated cathedral. Only when Ukraine gained its independence did Feofaniya began to revive. In 1990, the vandalized church building was given back to the Church. Inside the church premises were full of random steel armatures and ugly pipes of all sizes. Numerous wrecked laboratories were rubbish tips. The mosaic floor was ruined by the railroad tracks that had been laid across it. For renovation, the Academy of Sciences of Ukraine provided funds only sufficient for clearing the debris. In 1990, they managed to rip out the partition walls, and in 1991 – to restore the domes. To seamlessly repair the holes caused by mine and shell explosions, they needed old bricks of an 18-sided shape. Today’s bricks cannot be manufactured in this way, so they were cut by hand. Three years later, the skete of the Holy Protection Convent was established in Feofaniya. The builders revived the churches, the artists restored their beauty, and the diligent nuns grew flowers and vegetables. Nowadays, the monastery is in perfect harmony neighborliness with this nationally important park.