European Square – a square in the Shevchenkivskyi district of Kiev.

The European Square from which Khreshchatyk (Kyiv’s main street) begins is an amazing place. It was known under many different names during the last two hundred years: Horse’s Square – Theater Square – European Square – Tsar Square – Third International Square – Stalin Square – Lenin’s Komsomol Square. When Ukraine became independent, it regained its historical name, well-loved by Kyivans – the European Square. The surrounding landscape, houses and monuments were renovated, modernized and transformed; but enough original features remain for European Square to be recognizable as the square depicted on old postcards. The large flowerbed in the center has never changed, except for the ancient fountain of 1840 named Ivan that has been removed. Of all the pre-revolutionary buildings, only the Kyiv Philharmonic (formerly the Merchant’s Assembly) built in neo-renaissance/baroque style in 1882 by architect Vladimir Nikolaev has survived. Some of the old buildings were destroyed during WWII and some after. 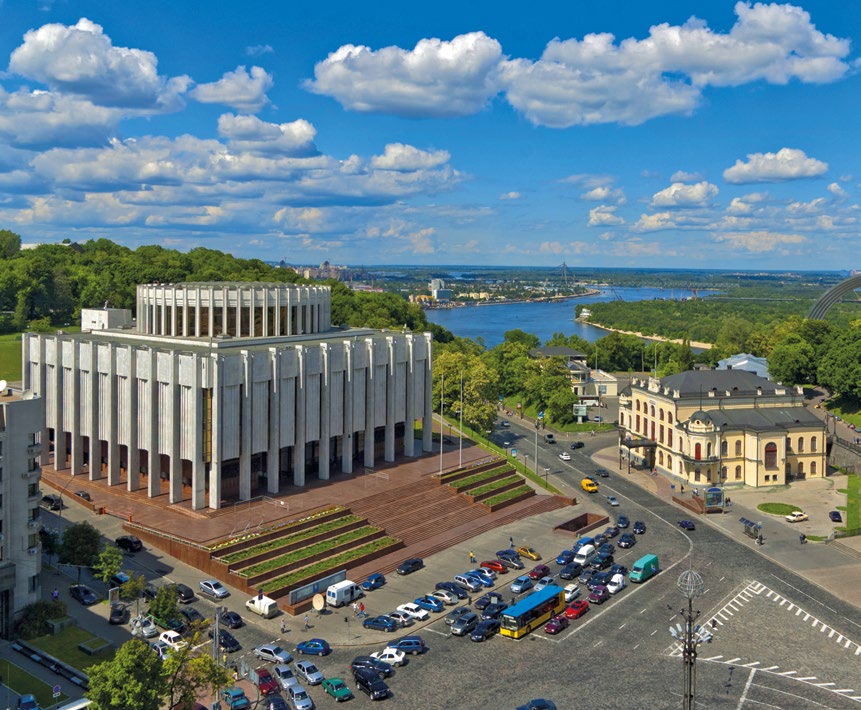 Today’s European Square is dominated by the multi-story Dnipro Hotel built in 1964 by famous Kyiv architects Victor Elizarov and Natalia Chmutina. Another white building attracts attention with a wide multi-tiered staircase. This is the former Kyiv branch of the Central Lenin Museum built by Vadim Gopkalo in 1982. To build it, the original European Hotel which had survived WWII was demolished and a large part of the Vladimir hill was leveled. After Ukraine declared its independence, this building became known as the Ukrainian House, a venue for exhibitions and fairs, while skateboarders and roller skaters made use of its wide steps. Hotel Dnipro faces Yaroslav the Wise National Library of Ukraine built in 1911 with funds donated by Kyivans and designed by architect Zbigniew Klave. Despite all the reconstruction, European Square still remains one of the most intimate areas of central Kyiv with access to Khreshchatyi and Mariinskyi parks, the Vladimir Hill and to the Dnieper embankment.