Dynamo stadium was built in 1934-36 (architects V. Osmak and V. Bespalov) on the site of the former Chateau de Fleur Park and athletics track. The main entrance designed as a concave colonnade flanked by two pillars (architect N. Manucharova and V. Polishchuk) was added a little later. The stadium was originally named after the then all-powerful head of Ukrainian NKVD Vsevolod Balitsky. Six months later he was shot dead. A replacement was urgently needed and the authorities opted for Nikolai Yezhov, the head of the NKVD of the entire USSR. But, he was arrested in 1939 and shot in 1940. The local government did not go down this route again and for a long time after the stadium stayed as just the Dynamo stadium. Many, many years later it was given the name of the famous football coach Valery Lobanovsky. 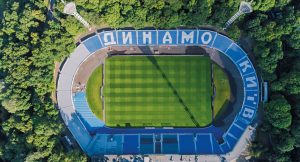 The stadium restaurant, designed by I. Karakis in 1934 is a listed building, – one of the rare surviving showpieces of Ukrainian constructivism. It is still with us today albeit with an altered interior. In 1955-56, the stadium was reconstructed. Under the west wing of stands a two-storied pavilion with a winter pool, a swimming hall and a 50-meter shooting gallery was added. In 1967, the first two heated open air swimming pools in Kyiv were built. One was intended for high-board diving and was therefore much deeper and quite small. The second was used by swimmers and water polo players. The stands around the pool could accommodate 2,000 spectators. Ten years later, in 1977-80, the stadium was once again reconstructed before the Olympic Games and four 45-meter floodlight towers were installed. Near the stadium, at the entrance to Mariinskyi Park, there are monuments to the Dynamo Kyiv footballers who died during World War II, and to Valery Lobanovsky, who is one of the top ten greatest football managers of all time as ranked by World Soccer. And in 2017, UEFA also included him in the top ten of the greatest football managers in Europe.