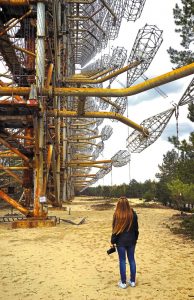 This legendary secret object thr “Duga-1” still boggles the mind. They said it was a zombie radar to control the will of the Soviet people, or even a brain “burner.” This myth is used in the plot of the famous S.T.A.L.K.E.R. computer game. Now it is no secret that it was intended as a long-range radar. The giant antenna detected launches of the American Shuttle spacecraft, but its main purpose was the probable nuclear missile attack from the West, including launches from nuclear submarines. The facility was commissioned in 1985, at the very end of the Cold War. 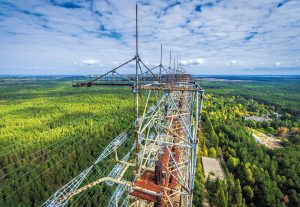 The antenna consists of two radar grids, small and large. There is also the command post and auxiliary systems building. Only 3 of these complexes were built in the USSR. One was near Mykolaiv, the other in Komsomolskon-Amur, and the last in Chernobyl. The first two have long been dismantled. Only the third survived, closed in 1987, of course, due to the Chernobyl accident. After all, Duga-1 is only 9 km (5.5 mi) from the nuclear power plant. The place was not chosen by chance; the colossus consumed a huge amount of electricity. NATO military called it the Russian Woodpecker because of the characteristic tapping noise it caused on shortwave radio bands. They also say the antenna interfered with civilian air travel, so the world community demanded that it be silenced.