The Dovzhenko base is located slightly west of Skazochny. It is hidden in the forest on the side of the road, between the Uzh and Veresnya rivers. Unfortunately, the base is very poorly preserved: there are no longer any cabins. As at the Emerald, they were painted with fairy tales. They were unusual as they were built on stilts. The only thing that survived here are the numerous latrines. 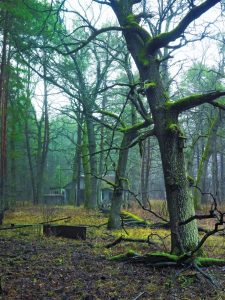 There are small tourist buses in the forest. They were here long before the accident, they were used as warehouses. Not even a scrap of paper is left in the ramshackle library. The old water tower is still intact, but illegal metal collectors will soon realize they can get a few extra tons here. Before the Chernobyl disaster, hundreds of people vacationed here every year. And about 5 km (3 mi) to the west, near the village of Rassokha, there was an airfield. After the accident, troops that worked on the disaster clean-up were stationed here for a short time. They left gas masks and helmets scattered throughout the forest. But now this area is clean from radiation. At the airfield is the famous dump for radioactive equipment Rassokha, which was eliminated at the end of 2012. The ruins of the Kyiv film studio’s former summer recreation camp won’t last for much longer. Just a couple more years, and the forest will have finally swallowed it. Only photos and a dot on the map will remain.