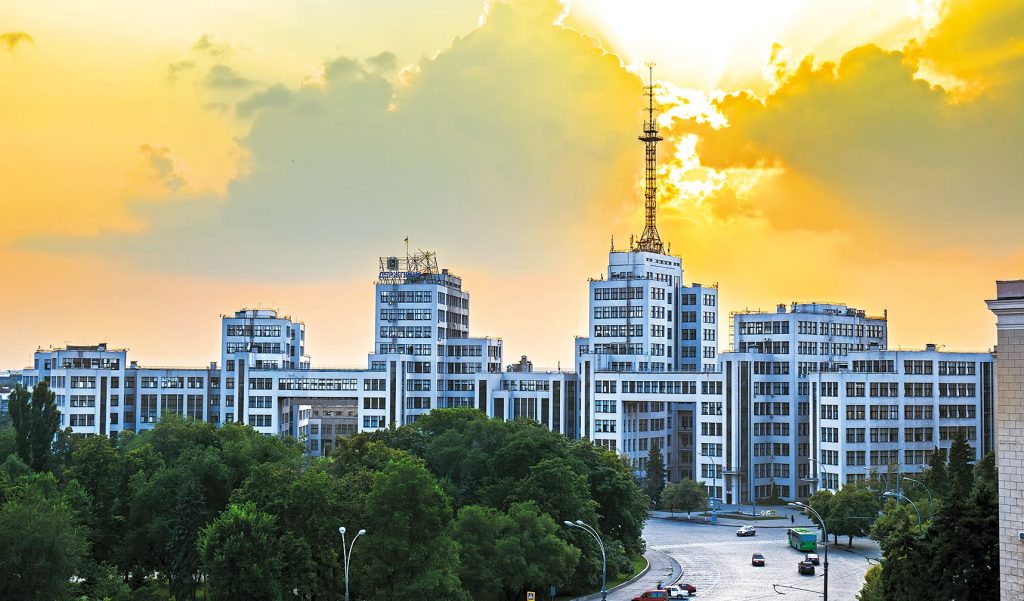 From 1919 to 1934, the capital of Ukraine was not Kyiv, but Kharkiv, the second largest city in the Ukrainian Soviet Socialist Republic. In the center of this city of 1.5 million is Independence Square, with one of the first Soviet skyscrapers, called Derzhprom. It took three years to build, from 1925 to 1928 – in record time, you could say, especially considering its size: 60,000 m2 (645,835 ft2) of usable space and 63 m (207 ft) tall. And if you also count the transmission tower that was installed on the roof in 1955, then it is 108 m (354 ft) tall.
Built with reinforced concrete, 40,000 m2 (430,556 ft2) of glass in 4,500 windows, and laconic forms, French writer Henri Barbusse called it “an organized mountain.” It is a great example of the constructivism avant-garde design that came out of the young USSR and was characterized by laconic forms, strict lines, and a monolithic appearance.

Kharkiv was occupied by the Nazis during the Second World War. Stables were located on the ground floor of Derzhprom, and for about two years, rhesus monkeys that had escaped from a nearby zoo lived on the floors that were not used. In 1943, the Germans set the building on fire, but it was not significantly damaged, and by 1947, it had been fully restored. Curiously, today we can still see many elements of the original interior, and even seven of original 12 elevators installed in the 1920s still work.
Tourists are drawn not only to Derzhprom, but to the immense square where it is located. In 2008, 12 hectares (30 acres) of its unique space were enough to host 300,000 people (according to some estimates) who came to hear the concert of British band Queen.