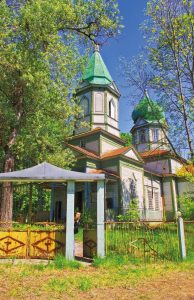 The interesting history of Church in Krasne.

The only surviving church in the Exclusion Zone on the left bank of the Pripyat is located in the village of Krasne, evacuated in 1986. Previously, it was located in the village Masheve, but then was moved closer to the water. The year 1800 is erroneously marked on the facade of the present church as the date of construction. Obviously, it was completely rebuilt in the late 19th – early 20th century. In the “Tales of the towns of Kyiv province” (1864), this rich church of the 5th class is described. 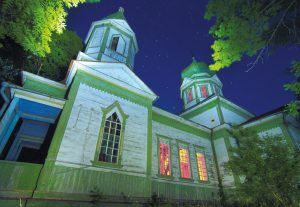 The construction that has lasted until our time is more modest and typical for the churches of Polissya. Orthodox pilgrims very rarely travel here, crossing almost 30 km (18.6 mi) shaking and crawling, like a snail, in a bus along a narrow road with potholes, from Chernobyl to the cherished church, through a kind of enclave, on one side the river, and brotherly Belarus on the other. The church is not locked. Of course, it is creepy to come here at night. It is reminiscent of a Nikolai Gogol story. But only small timid owls live here. And drafts, blowing through the cracks, have scattered the requiem and prayer notes of pilgrims.