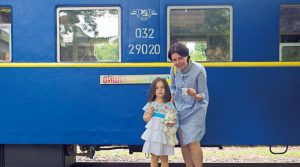 The miniature South Western Railway (Kyiv Children’s Railway) is a real narrow-gauge railway with two little stations at the opposite sides of a big circle, helped by teenagers. It consists of two rings – small and large. On the large ring there is a viaduct over a ravine with a height of 19.6 m and length of 100 m. The length of the railroad is 2.8 km. Kyiv Children’s Railway was opened on August 2, 1953 in Syretskyi Park. The trains (Tu-7 and an old German Gr-336) run between two stations: “Vyshen’ka” and “Yablun’ka”. The track is equipped with semi-automatic lock, trains, stations, locomotive radio and 13 railroad semaphore signals. Everything is real here – just smaller! It is also the home of the Young Railwayman School, where children are given an introduction to the rail industry. Young drivers will find everything necessary for future railway professionals to learn the job! Thanks to the work on this miniature railway, a lot of students continue railway studies and end up working on the real thing. The railway is open from May until the end of August in Syretskyi Park (from 10:30 to 17:20). You can find this park on Shamryla Street, 4. The nearest metro stations: Dorohozhychi and Beresteiska. To board the train you need to buy tickets; children under six can travel free. 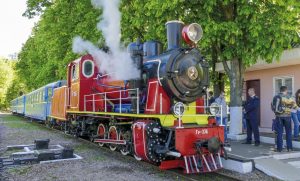 What can be more fun than to take a tiny train where all the crew are the same age as you? This railway connects 2 stations – Cherry and Apple – in one of Kyiv’s parks and has worked every summer for the last 63 years. The railway for kids in Kyiv is a great way to give your child a surprise!