The history of Chernivtsi.

Chernivtsi is the historic center of Bukovina, located on the banks of the River Prut. It is a relatively young city; the first written reference is from the early 15th century. Since then, it has belonged to the Moldavian Principality, the Ottoman Empire, Austria-Hungary, Romania, and the USSR; now it has become a regional center of Ukraine. This frequent change in territorial affiliation had a huge impact on the culture, architecture, and traditions of Chernivtsi. There are several ethnic communities living side-by-side – Ukrainian, Russian, Romanian, Jewish, and Armenian. The most commonly used languages are Russian, Ukrainian, and Romanian. But, of course, the Austro-Hungarian influence (1775-1914) affected the appearance and way of life most of all.
In the late 19th and early 20th centuries, Chernivtsi began to develop so rapidly that the electric tram was introduced here earlier than in Vienna. The opera house was built by the same architects who built the Odesa Opera House and theaters in Vienna and Berlin, and the theater was built according to an identical design in Bavaria’s Fürth. 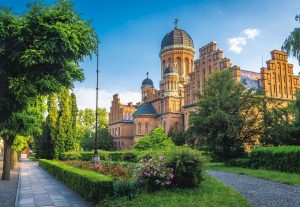 This is a city of low-rise buildings. As in Lviv, the streets are paved with cobblestone. There are many houses built in the Art Nouveau style (Viennese Secession), each with its own distinctive look and zest; an abundance of small cafes and relatively inexpensive cozy restaurants with diverse cuisine; and well-maintained parks. The buildings of Chernivtsi State University are the former residence of the Orthodox Metropolitans of Bukovina and Dalmatia, and are listed on the UNESCO World Heritage List. This unique complex was designed by Czech architect Josef Hlávka, which later repeatedly won prizes in various competitions, including the Gold Medal at the World Exhibition in Paris. The Marble Hall (restored after a fire in 1944) and the authentic Red Hall, whose walls are covered with red Chinese silk, are especially notable for their beauty. It is also interesting that the tower above the entrance of the current Geography Department is decorated with the Star of David, in memory of the Chernivtsi’s Jewish community, who donated a significant part of the money for construction of the Metropolitans’ residence.