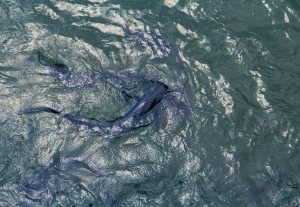 Giant catfish living in the canal that supplied water from the cooling pond to the Chernobyl nuclear power plant reactors became “celebrities.” At lunchtime, the fish swim to the bridge over the canal for treats. The staff is happy to bring leftover bread and feed them.

The station workers had a favorite among them — Borka, 2 meters (6.5 ft) long. His slow shadow was almost always visible near the surface. A passionate lover of white bread, the catfish could swallow half a loaf at a time. Borka swam slowly towards a tossed piece of bread. Diving to the very bottom, he slowly emerged from the dark depths, forcing the audience to hold their breath. After a few seconds, an open fish mouth appeared from the turbid water, resembling a wideopen bag. Thick lips silently closed over the delicacy. The audience exhaled loudly and giggled with children’s delight. 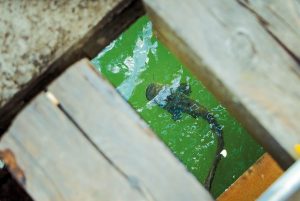 Despite his celebrity status, Borka’s fate was sad. Someone caught the gullible fish and yanked him onto the concrete shore. They did it “for fun”, the fish from the Chernobyl NPP cooling pond are not edible (radioactive). Borka’s half-meter (1’7”) head with a fishing hook protruding from his mouth lay under the bridge for another two weeks, attracting crows and startling tourists. In 2012, the Discovery TV channel filmed an episode “River Monsters” in the Exclusion Zone. The show’s host, Jeremy Wade, was supposed to catch an “atomic killer” in the Chernobyl cooling pond. It didn’t happen quickly, but he managed to do it.