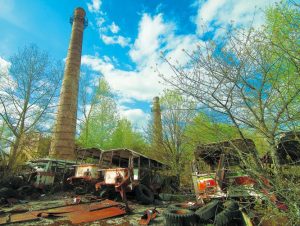 The interesting history of Bus Cemetery in Chernobyl.

One of the most obscure objects of Chernobyl is a huge bus junk yard. At one time, these vehicles transported Exclusion Zone employees who were involved in decontamination and operation of the Shelter. When the vehicles were decommissioned, they were placed in a huge sump near an abandoned elevator. This building is clearly visible from Kirov Street, on the way to Pripyat. 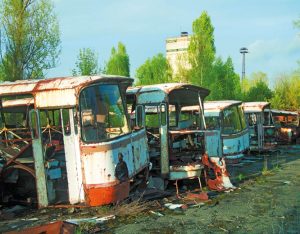 Basically, there are LAZ 695 “Lviv” buses built by the Lviv Bus Plant. Produced since 1955, this bus model was updated so many times, mostly externally, that its various modifications may seem like different vehicles. Moreover, all its versions were used simultaneously. It was designed considering the experience of the Mercedes Benz 321, and its style was developed from the Magirus bus model. Despite the cramped interior, narrow doors, overheating engine, and a number of other drawbacks, the LAZ was distinguished by the simplicity of its design and unpretentiousness on the worst roads. It had another interesting feature: if necessary, the LAZ is easy to convert into an ambulance, simply by dismantling the seats. In the front of the bus, under the windshield to the right of the driver’s seat, an additional door was provided for loading the wounded. Devised as a means of saving lives, the modest LAZ accomplished this task in 1986.