Bessarabsky Market. The ceremonial opening of this large indoor market took place on July 3, 1912. The market took its name from Bessarabska Square where it is located. It is ideally situated: the central street of the capital, Khreshchatyk, stretches from European Square through Maidan and on to Bessarabska Square. Not a long way, but enough to prepare your mental shopping list! Bessarabska Square is a strange and unusual place: as far back as the 19th century there was the well-known “Water Pipe” here, descending steeply down to Velyka Vasylkivska Street. 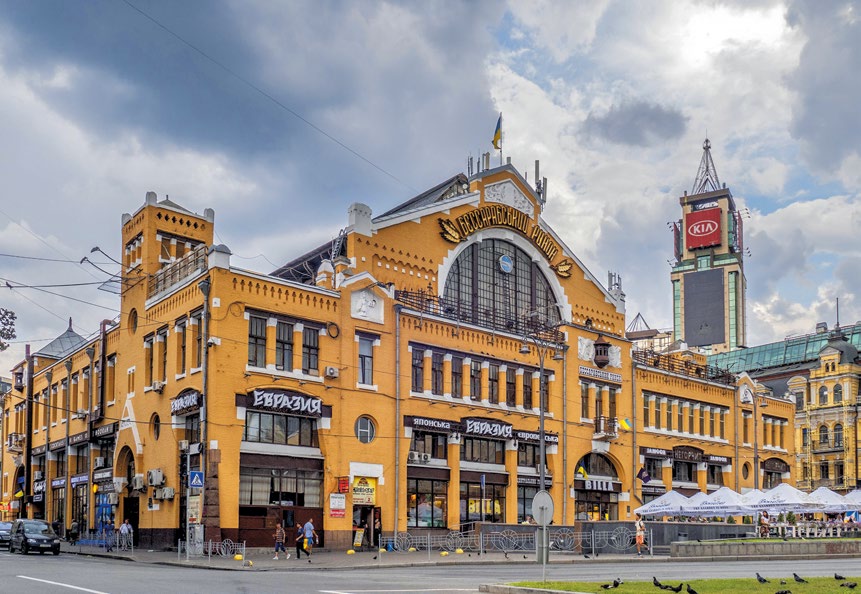 During heavy rains riders and their horses could be washed away in the flood. Sculptor Mikhail Mikeshin dreamed of building a monument to Khmelnytsky opposite it, but it would have looked as if the hetman was pointing his mace directly at a popular pub. So it did not work out for Khmelnytsky. Instead, one of two Kyiv demonstration gallows was set up here in WWI and WWII, and a monument to Lenin was later erected but then later demolished. Funds for the market’s construction were provided for in the will of the sugar magnate, philanthropist and benefactor Lazar Brodskyi. The second floor was intended to be a public library funded by revenues from the market, but the First World War and then the revolution ended that idea. Nevertheless, the building was a great success. The project was developed by Polish architect Henry Julian Gai, who had experience of designing a covered market in Warsaw, and Kyiv architect Mikhail Bobrusov, who traveled specially to Europe to study such markets. Due to his efforts, a huge dome of glass and metal, similar to the heavenly vault of a temple or the shape of a fantastic ship, was erected over Bessarabka. The market facade is decorated with sculptural freizes – “The Peasant with the oxen”; “The Milkwoman” as well as the Bull’s Heads, flying geese on the iron gates and many panel paintings on the interior walls. One of the most beautiful is “Fish in the fishing nets” near the ornate street light. Decorative ceramics and figured brick built into the walls create a pleasing blend of the old and the new. The market was designed to be multifunctional: with rooms for cafes, shops, and administrative offices all around the perimeter. The stalls in the huge trading hall are perpetually piled up with meat, fish, lard, fruits, vegetables, honey products and flowers.