Who Is the Archangel Michael?

In 1782, the tsarist authorities approved Kyiv’s official coat of arms: the image of Archangel Michael in a silver gown with a flaming sword in his hand against an azure background. In 1851, Nikolay I ordered the imperial crown to be shown on all the coats of arms of all provinces, districts, and provincial towns of Russia’s Empire. So Kyiv’s coat of arms was redesigned: a shield topped with the royal crown and edged with Alexander’s azure ribbon was added. Archangel Michael in a silver gown equipped with sword and shield was depicted against it. In 1917, Alexander’s ribbon was replaced by Vladimir’s ribbon, red with two black stripes on the edges. But then in 1919, this emblem was abolished as being of the “old regime”. Much later in 1995, the patron saint of our city returned to the coat of arms of the present-day capital city of independent Ukraine – but without the royal crown and the decoration ribbon. 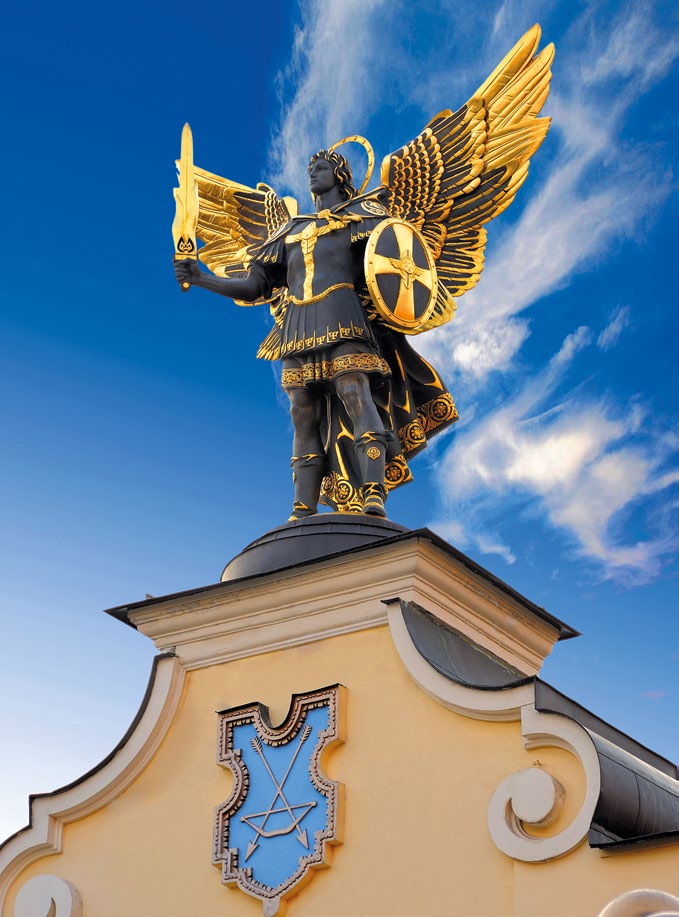 Today, statues of Archangel Michael can be found on Maidan (Independence Square), on Instytutska Street, in the public garden at Obolonskyi Avenue, on the facade of St. Michael’s Cathedral, on the dome of the Samson fountain, and in Podil. The monastery, the church, the square, the street and alleys in the city also bear the name of the Archangel. The church honors Michael the Archangel as a defender of the faith, and a fighter against heresies and all evil. He is glorified by many miracles recorded in the spiritual writings of Orthodox Christians, Catholics, Jews, and Muslims. The patronage of Archangel Michael contributes to the philosophy of Kyiv as a multi-ethnic and peace-loving city.