The fate of Anna, the daughter of Kyiv’s Prince Yaroslav the Wise, is amazing and unusual. She married the French king Henry I, one of the most powerful European monarchs of the time, and became famous for her intelligence and erudition. Many government documents were signed with crosses by the king and illiterate nobles, and only one real signature – Anne, the Queen of France. Her autograph is also preserved in Kyiv, on the wall of St. Sophia Cathedral. Her main gift was not scholarship, though, but the ability to awaken love. “Signed with the consent of my spouse Anne,” “Signed in the presence of Queen Anne,” dictates King Henry: this is not a tribute to literacy, but respect. They lived together nine happy years and she gave birth to seven children. Then the king passed away. 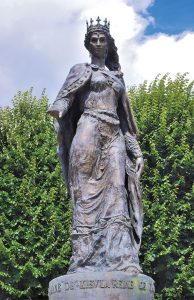 Anna became regent for her young son, King Philip I. But only for a year. She was loved by one of the most powerful French lords, the Amiens count Ralph the Great, who had a mad passion for her. They began to live together openly, despite a direct ban by the Pope, and then they were excommunicated for violating the bonds of marriage – the count’s second wife was still alive. Only after her death could Anna and Ralph officially get married. However, this happiness was short-lived. Anna was widowed a second time, and from then on, she lived as the queen mother at the French court. She founded the abbey at Senlis, where there is still a sculpture of her with a model of the monastery in her hands.