Andriyivsky Descent, popularly known as the Montmartre of Kyiv.

This is without a doubt one of Kyiv’s most popular streets – and one of its oldest too. In ancient times it linked the administrative part of the upper town – the city officials – with Podil, the lower town of merchants and craftsmen. It was so narrow, that only pedestrians and those on horseback could pass. No carts or wagons. Only in the 18th century was the street widened to be more suitable for horse drawn vehicles. Andriyivsky Descent begins at the summit of Starokyivska Hora (Old Kyiv mount) near the ornate late-baroque St. Andriyivsky Church, which gave the street its name. The historical name of the descent was Borychiv Descent. In the early 20 century it became known as Liver Descend (after the name of the young revolutionary Georgiy Liver), but in 1957 the street was once again renamed Andriyivsky Descent. Almost every building here is an architectural gem. The intriguing building at No. 15 is referred to by Kyivans as “Richard’s Castle”. The Bulgakov Museum is a must visit for literary enthusiasts, and is located at No. 13 – a monument to this world famous writer. Next to the museum is a popular place for photoshoots. 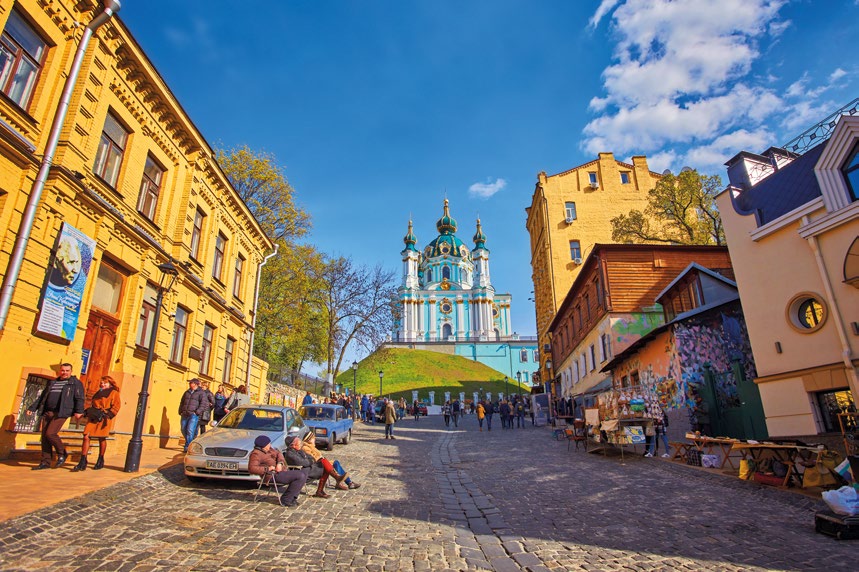 At the bottom of the descent lies the unique One Street Museum, one of the most famous and popular museums in Kyiv with a small but exquisite display of exhibits. Andriyivsky Descent also hosts two popular Kyiv theaters: Koleso (“The Wheel”) and the recently renovated Theater on the Podil. This steep and winding descent, paved with cobblestones, is a traditional venue for outdoor festivals and fairs, and is dotted with numerous intrg and twisting open aiiguing arr museum. It is at the very heart of Kyiv’s artist community, and is the favourite st galleries, museums, cafes, bars and restaurants. Today Andriyivsky Descent looks like a lontop for tourists in search of paintings and traditional Ukrainian crafts. This is also a well-known place for all kitsch Soviet souvenirs. Strolling down this street, you will meet artists, jewelers, wood carvers, embroiderers and knitters, skin and fur experts, potters, glass blowers and many other creators of original products. You can buy a traditional Ukrainian embroidered shirt or a woven bag, accessories with semiprecious stones, glass, ceramics, leather or wood, find an genuine antique or an old postcard – or just a funny T-shirt or a fridge magnet. The street often feels like a non-stop party – so go early in the morning to enjoy the beautiful architecture, the views and the street, before the crowds arrive.