Akkerman, or Bilhorod-Dnistrovskyi, fortress is an architectural monument of the 13th-15th centuries and the largest defensive structure in Eastern Europe. It is located in the Black Sea estuary at Bilhorod-Dnistrovskyi, which, according to UNESCO, is one of the world’s ten oldest cities that have existed continually from their creation until today. Archaeologists have established that the Greek city Tyras once stood on the site of the fortress, which took its name from the river Tyras, later called the Danaster, and even later, the Dniester.
The fortress was built in the 13th century by the Golden Horde. In the 14th century, the Genoese were granted the right to use it as a commercial warehouse, and they built the oldest and sturdiest structure, the Citadel. After the Horde lost the region, the structure fell into the hands of the Moldavian kings, who began building the fortress that we know today.
In 1484, after a long siege, the Bilhorod-Dnistrovskyi fortress was captured by the Ottomans, who called it Akkerman (White Fortress); their rule lasted more than 300 years. In the early 19th century, the Akkerman fortress became the property of the Russian Empire, and in 1832 it lost its status as a military facility.

The Akkerman Fortress was built in the 13th century by the Golden Horde. 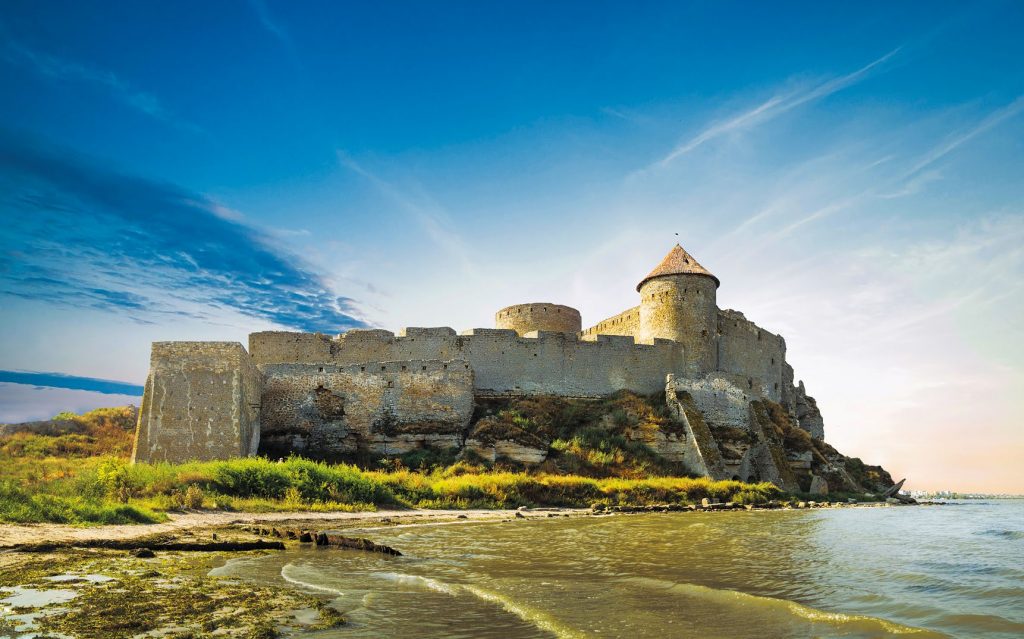 All of the fortress’ buildings are united by thick walls, up to 5 m (16 ft), with a height of 15 m (49 ft) and a total length of 2.5 km (1.5 mi). In the 13th century, 34 towers were erected around the perimeter, of which 12 were for battle (with weaponry slits and ammunition in the basements). Today, 26 have survived. A 20-meter-deep (65-ft) moat surrounds the fortress.
The oldest part of Akkerman fortress is the Citadel, where the head of the fortress and his guard were located. This structure has many underground passages and shelters, and it is absolutely inaccessible to enemies. The garrison yard was used for permanent housing of military units. There were dwellings in the civil yard, but they have not been preserved until our time. During times of danger, residents of the city and nearby villages sheltered here.
The port yard stretched along the coast, and goods brought to the city were stored here. On the east side, the so-called Kiliya Gates led to the fortress, and on the west side, the Ovidiopol Gate. You can get to the fortress from Odesa (46 km / 28 mi) by car, bus, or train.